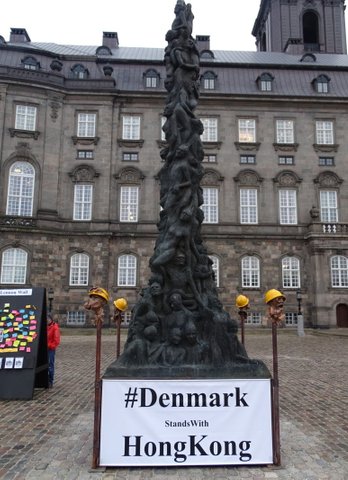 The sculpture is made by the Danish artist Jens Galschiøt, and it is erected in collaboration between Galschiøt, the green political party The Alternative and Amnesty International Denmark.

A group of parties in the Danish Parliament supports the art manifestation: Inuit Ataqatigiit (IA), SF, Enhedslisten and Fremad.

“Hong Kong citizens only have a chance of preserving freedom of expression and the right of peaceful assembly if they are backed by us in the West. Also, if it is only moral support. I have talked to activists in the democracy movement and I know this kind of support is crucial to them,” says Jens Galschiøt.

Galschiøt's Pillar of Shame is a series of sculptures which mark grave abuses against humanity. The sculptures remind people of a shameful event which must never recur. The first sculpture was made to mark the Chinese authorities’ bloody crackdown on peaceful protesters at Tiananmen Square in Beijing in 1989. Hundreds, if not thousands of unarmed student-protesters and civilians were killed.

“The sculpture was first erected in collaboration with Hong Kong’s Democracy Movement 23 years ago in Hong Kong. It has become one of the important symbolic sculptures in the city. Since that time, I have worked with artists and political activists both inside and outside China,” explains Jens Galschiøt.

Three Pillars of Shame are permanently located in Hong Kong, Mexico and Brazil.

In front of the Danish Parliament

The Pillar of Shame, erected in front of the Danish Parliament, is a modified version where Hong Kong activists are also portrayed.

The sculpture will stay outside the Danish Parliament for three months, where activists will organize various happenings.

For the Danish party The Alternative it was natural to be co-organizing the art manifestation.

"We have for a long time focused on the disturbing and deeply critical situation in Hong Kong, both in the Danish Parliament and at a ministerial level. We have also had election observers at the last district council election in Hong Kong," says the party’s former political leader Uffe Elbæk.

"We are showing our support and commitment to the people of Hong Kong. We support this because the conflict in Hong Kong also tells a story about human rights being under pressure many places in the world today. Freedom of speech and the right of peaceful assembly is under attack and methods like facial recognition is being used in tyrannical ways, which we want to be unlawful in Denmark.”

Human rights are under pressure

Amnesty International has documented how Hong Kong citizens' human rights have been curtailed. The organization has also documented police violence against the protesters and the use of unnecessary and excessive force.

“It is important for us to show solidarity with the people of Hong Kong who are fighting for freedom of speech and peaceful assembly. We will not accept peaceful protesters being beaten, imprisoned and prevented from expressing their opinions.

Danish authorities have defended the erection of the Pillar of Shame, despite complaints from Chinese officials.

Officials from the Chinese Embassy in Denmark had attempted to pressure authorities into removing the statue outside the parliament in Copenhagen, warning that it would damage relations between the two countries, according to newspaper Jyllands-Posten – citing a note from the City of Copenhagen which authorised the artwork.

The note said embassy representatives phoned municipal authorities a day before the sculpture was erected saying that it mispresented the political situation in Hong Kong, adding that it would be “wise” to withdraw the sculpture’s permit.

“The right to freedom of expression does not mean one can willfully slander and discredit another country,” they said. “The pace of the Chinese nation’s great rejuvenation is unstoppable. The conspiracy of a few people and anti-China organisation in Denmark is doomed to fail.”

As a result an open hearing was held on February 4th at the Danish parliament over allegations that Beijing had sought to censor Danish artists and art institutions in Denmark, including Copenhagen film festival, the Royal Theatre and the erection of the Pillar of Shame. 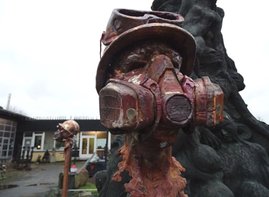