In the aftermath of the corona crisis, Hong Kong's local government continues its attack on freedom of speech. It marks the world-renowned Chinese artist and system critic Badiucao together with artist Jens Galschiøt at an event around the Pillar of Shame sculpture in front of Christiansborg.

While everyone's eyes are on fighting COVID-19, Hong Kong authorities chose to arrest 15 of the city's Democratic veterans and accuse them of organizing and participating in free speech demonstrations that took place more than six months ago. On Monday, their trial begins.

The fierce attack on Hong Kong's freedoms has led Jens Galschiøt to enter into an art collaboration with Chinese system critic and artist Badiucao. This is in the form of a new decoration of Galschiot's artwork Pillar of Shame, which is already placed in front of Christiansborg in solidarity with the Hong Kong protesters' struggle.

“China is exploiting the global crisis to weaken the fundamental principles of the free world. Hong Kong's freedoms are one of the most direct victims of Beijing's impasse, ”says Chinese Badiucao, who has drawn a picture of a corona virus carrier aboard. In front of the wagon stands a peaceful protester from Hong Kong with his yellow umbrella.

“The Beijing authorities deliberately choose to arrest the 15 democracy advocates at a time when the authorities assume the free world is too busy fighting the deadly virus to think of Hong Kong's freedom struggle. It's a tactic Beijing often uses to punish influential advocates of democracy such as Liu Xiaobo, who was sentenced to 11 years in prison in Christmas 2009 for his activism, "says the Chinese artist, who has become known for his drawings, portraying China's leader, Xi Jinping, who chases Winnie the pooh.

Until recently, Badiucao remained anonymous but revealed its identity last year by marking the 30th anniversary of the student revolt at the Tiananmen Square in 1989.

The arrest of the 15 Hong Kong democracy icons is seen as a major blow to Hong Kong's democracy movement, which over the past year has demonstrated in large numbers in the city's streets to preserve the freedoms promised to them when Britain returned to Hong Kong in 1997 China.

"It is completely obscene that China is now exploiting a global health crisis to try to eliminate fundamental human rights by cracking down on the peaceful part of the Hong Kong democracy movement. China exploits the most shameful that Hong Kong citizens have limited opportunity to protest, and the world community is more busy with the corona crisis, the world economy, and whether the ZOO should reopen than watching China try to stifle democracy and freedom of speech in Hong Kong , ”Says Jens Galschiot. 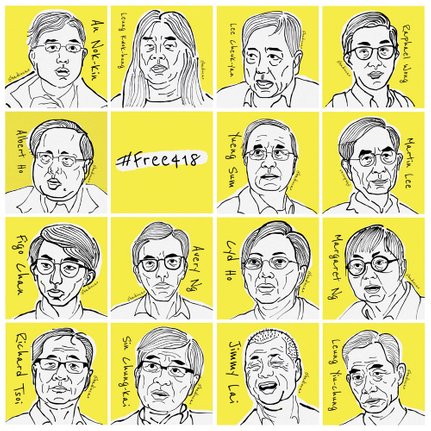 "It is completely obscene that China is now exploiting a global health crisis to try to eliminate fundamental human rights by cracking down on the peaceful part of the Hong Kong democracy movement. China exploits the most shameful that Hong Kong citizens have limited opportunity to protest, and the world community is more busy with the corona crisis, the world economy, and whether the ZOO should reopen than watching China try to stifle democracy and freedom of speech in Hong Kong , ”Says Jens Galschiot.

Galschiøt is a big fan of the unique drawing made by his Chinese artist colleague for the Sham Support.

“It's amazing that we got Badiucao, one of China's most prominent street art artists - China's response to Banksy - to create a unique work for our event. It is artistically brilliant that he has managed to link brutal use of power, the movement of democracy and the exploitation of the corona crisis. At the same time, there are references to the 1989 Tiananmen massacre, where China slaughtered thousands of peaceful protesters fighting for basic democratic rights. History now repeats itself 30 years later with young people in Hong Kong fighting to preserve these rights. "

The Danish government has to say no to China

Amnesty International closely monitors developments in Hong Kong and documents the violations of freedom of speech and assembly as well as police violence against the protesters. On the occasion of the event at the Palace Square, Amnesty Denmark has approached the Danish party leaders with a number of recommendations that the government should work for.

"The EU must distance itself significantly from the Hong Kong authorities' prosecution of peaceful protesters, and international pressure must be put on the local government to decriminalize the right to speak and assemble. In addition, Denmark must actively push for an impartial, independent

and effective investigation into the police's excessive use of force against the protesters - including police violence, ”said Trine Christensen, secretary general of Amnesty International Denmark.

The former party leader from the Alternativet, Uffe Elbæk, supports Amnesty's recommendations and encourages his colleagues to do the same.

“China's political leadership has once again hit hard on the Hong Kong democracy movement in the wake of the Corona crisis. Most recently with the arrest of 15 high-profile local politicians and activists. It is therefore vitally important that both Denmark and the EU at high level speak from China.

On Monday, May 18, the 15 prominent Democratic leaders will face trial in Hong Kong. One of the defendants is 81-year-old Martin Lee, who is known for being the father of Hong Kong's democracy movement and the architect of the freedoms that the city's citizens now struggle to preserve.

At the same time, there are politicians among those arrested who risk being cut off from taking part in the upcoming parliamentary elections in September - the Legislative Council. According to the terms and conditions, the Legislative Council cannot stand until a prison sentence has been sentenced for an offense and up to 5 years after the sentence has been handed down.

The defendants face up to five years in prison.

Jens Galschiot, who has also been involved in Hong Kong's democracy movement back in the 90s, personally knows several of the defendants. In 1987, he set up his sculpture The Shame Support in Hong Kong in memory of the students who were killed at Tiananmen Square in 1989.